What does the price of a flight ticket and a loaf of bread have in common? 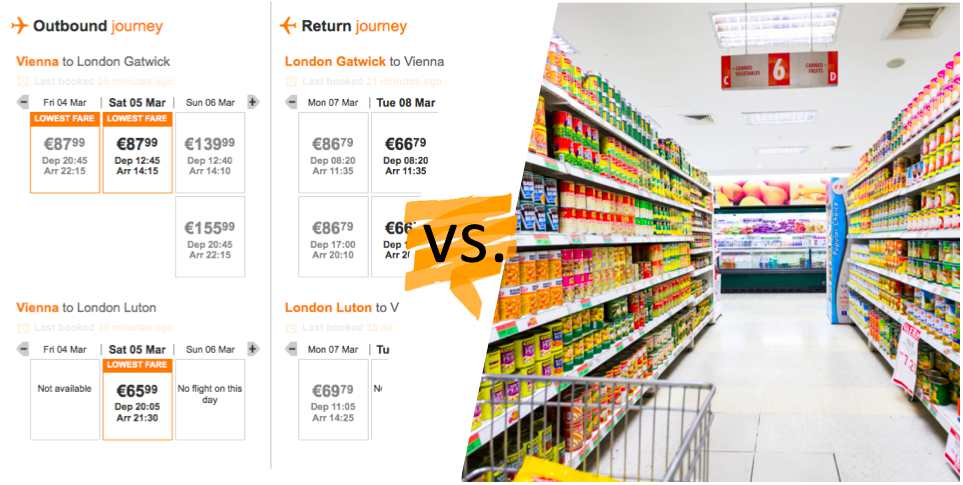 Pricing in airline industry has more in common with that in retail than it may seem at first sight. What lesson can our retailers learn from the steps taken by airlines?

Throughout their business history, airlines have survived many shocks. As to pricing, the one they suffered in the mid 1980s is the most interesting. In February 1978, increased fuel prices and the almost oligopolistic position of the then market players finally resulted after a mounting public pressure in the deregulation of the whole airline sector in the US. Within several years, large airline companies triggered an aggressive price war, which escalated even more after the entry of new small players as well as the birth of the first genuine low-cost airlines. In the beginning the strong players thought they were able to compete using controlled price promotions, which smaller competitors could not withstand financially. However, this did not happen. By the year 2001 the price war had buried nine large airlines (e.g. Pan Am, Continental, TWA among others) and more than a hundred small ones – including the average majority of the ones which were established after the deregulation.

Today, 30 years later, general goods retail trade sector in Europe keeps experiencing a different but, by its very nature, similar shock. The best example to illustrate this is one of Europe´s key markets – Great Britain. Before the financial crisis broke out in 2008, the English retail market had been represented virtually only by four big retail chains: Tesco, Asda, Morissons and Sainsbury’s. Despite the fact that Aldi and Lidl opened their stores on the British Isles as early as 1990, their market share was minimal. Although they gained customers with very low income, they did not particularly endanger the market position of large established players for many years. The onset of the crisis, however, changed something – all of a sudden, the middle class discovered both Lidl and Aldi so they could save money in bad times. Discount stores understood quickly this unique opportunity and started to adjust their offer to more affluent customers. They widened their assortment, added premium products and brands (e.g. high-quality wine at very sensible prices in certain parts of London) and started to communicate freshness and quality. Suddenly, even a Brit with an average standard of living was not ashamed to buy goods in a discount store anymore. Thus in 2010 the market shares of discount stores started to grow undisputedly at the expense of “the big four”.

The response did not take a long time to come. The first to shoot in the very destructive price war was Tesco. According to the phraseology typical of that time, the company “invested” half a billion pounds of their own margin in Christmas discounts for their customers. The other players followed in the next years taking similar steps. The result? Although “the big four” says that on average their prices are as little as 15% above the price level of Aldi and Lidl, the growth of these discount chains has not stopped. The only thing that has changed is that the initially great and strong players have erased together billions of pounds of their own profit, which could have been used for real innovation. All of them, perhaps except for Asda, with the giant WalMart behind it, are currently facing financial difficulties.

In order to survive their market shock the airlines had to adjust quickly, in particular mainly in their capability of effective pricing in a very complex business context. They learned gradually to take into account all factors of their business in time and thus gave the world a new approach to pricing: revenue management. Its correct implementation enabled a long-term growth of average revenues by amazing 5 to 10%. Later on, hotels and car hire companies started to use the revenue management, which, subsequently, brought them even better results.

Pricing in retail is very similar to that in airline industry in many ways. An extremely wide offer encounters the demand that fluctuates specifically in time. At the same time, numerous inputs, which influence the price, change in time, too. They are e.g. costs, competitors’ prices, but also the product mix itself. Products with various goods turnover speed and seasonality, sold in different regions and locations with varied preferences, purchasing power and competition increase this complexity. Moreover, specific retail has its specific challenges. Pharmacies need to optimize their long-term revenue from the sell-off of supplements to prescription drugs. Sellers of trendy and seasonal goods (e.g. textile ware, sport ware, footwear) need to optimize their overall revenues from sales in a particular season so that they will not have any blocking stock supplies left after the end of the season and of the natural demand. Sellers of model ranges, which are being constantly innovated (e.g. electronics), also need to optimize their price relationship while replacing each other in time.

That is why it is striking how little the retail chains managers – not only in this part of the world – rely on systematic and sophisticated analytics. Yet, at the same time, the retail chains dispose of all necessary data and thanks to the innovations in the recent years, necessary technology has become generally available, too. At most retail chains, however, we can find a nonsystematic, sometimes incidental and undocumented approach and a pricing management process, which lacks any support of modern optimization tools. An unclear managerial line and ownership of the pricing process will be also typical. Their price analyses are dominated by focus on history, without any effort to make future estimates more accurate in co-ordination with marketing campaigns. It is just this approach to pricing which results in reactive, impulsive and full-assortment-scale (and therefore visible to the competitors) pricing decisions which harm business and trigger price wars.

If the retail chains want to survive, they need to sophisticate their pricing and have to begin to manage their own revenues pro-actively and in a sophisticated manner – the same way as the airline companies did. They have to start asking obstinately: What should our pricing strategy be like? How to translate it into our everyday prices? How to maximize our profit on the long-term basis yet in harmony with this strategy? How to test, alongside, whether our strategy is correct? How to cope with all this while keeping the number of price changes in time as low as possible so that we can prevent negative PR, price wars or increased operational costs? All these questions are very difficult. Yet the answers to them are much closer than it may seem. A professional service that will, on a weekly basis, take care of complex mathematics and provide technology thanks to which numerous pricing decisions can become visible in the store windows and on the store shelves is already available on our market. There is no need to buy any extremely costly software, to install any hardware, to hire expensive experts or to contract for long years of cooperation. Owing to both profound knowledge of retail chains business and cleverly done processing of necessary mathematics in the background, this service brings results already after a few months. What is even more, this service can be easily tried out for a few months without any financial risk.